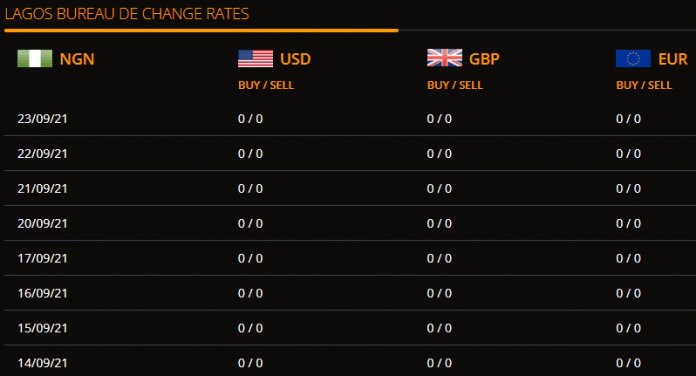 The Bureaux de Change (BDC) segment of the Nigerian foreign exchange (FX) market was supposed to be tiny and serving the retail end of the market, but like an anomaly such as the tail wagging a dog, BDCs are now being blamed by the Central Bank of Nigeria (CBN) for triggering a relentless slide in the value of the naira.

Ironically the stage for the current state of affairs, in which the Naira trades at a wide premium of N570 per dollars in the black market, compared to N414.9 per dollar on the CBN recognized Investor and Exporters (I&E) FX window, was set some 7 years ago in 2014 when the CBN under Governor Godwin Emefiele inexplicably continued to licence thousands of new BDCs despite admitting it was unable to effectively police those already licensed.

The CBN had in June 2014, increased the minimum capital requirement for Bureaux De Change operations in Nigeria to N35m in order to weed out what it said were “unserious elements in that sub-sector” and correct some grave inefficiencies and sharp practices.

It then directed all existing Bureaux De Change to comply with the new requirements by July 15, 2014. Before the hike in minimum capital requirement from N10 million to N35 million, a total of 3, 208 BDCs were officially registered with the CBN.

In August 2014, the CBN announced that a total of 2, 442 BDCs met the new capital requirement, and by November 2014 a total of 2,512 BDCs had reportedly scaled the re-capitalisation hurdle of the CBN.

However, instead of putting measures in place to effectively monitor the new set of BDCs that had met its rules, the CBN went on another BDC licensing spree.

Analysts MoneyCentral spoke to say it’s no surprise the CBN has lost control of that segment of the FX market.

“The CBN should do a candid introspection and come clean about what it was trying to achieve by licensing all these new BDCs, which it recently admitted are a major source of fraud and dollar round tripping in the foreign exchange market,” a bank FX dealer said on condition of anonymity.

The CBN at the end of its 2-day monetary policy meeting (MPC) held in July announced it had ended the sales of forex to BDC operators, saying the parallel market has become a conduit for illicit forex flows and graft.

The bank said it will also no longer process applications for BDC licences in the country. Weekly sales of foreign exchange by the CBN will henceforth go directly to commercial banks, the CBN governor, Godwin Emefiele, said.

“We are concerned that BDCs have allowed themselves to be used for graft,” Emefiele said.

The naira which was trading close to N490 per dollar before the announcement immediately collapsed to N530 per dollar and fell further to N570 per dollar thereafter.

A Bureau De Change (BDC) is defined by the Central Bank of Nigeria (CBN) manual as a retail foreign exchange dealer carrying on the business of Personal Travel Allowance (PTA), Business Travel Allowance (BTA), medical and school fees, and also to carrying on inward and outward transfer. So, a BDC is a licensed outfit, normally by the CBN.

The primary role of BDCs globally, according to the Association of Bureau De Change Operators of Nigeria (ABCON), is to ensure forex availability to the critical retail sector of the forex market in terms of supply, to bridge the gap between the official and the parallel market exchange rate.

Nigeria has also caught a break from higher oil prices which has helped to swell the CBN dollar reserve coffers. Nigeria gets 90 percent of its dollar earnings from the sale of crude oil.

Despite the increase in dollar firepower, which is set to rise further once inflows from the recent dollar bond sale hit the CBN reserves, there has been little reprieve for the Naira which remains under pressure.

“A lot of what is ailing the Naira is negative sentiment which is a fallout from the bad policy choices the country continues to follow. Oil prices are high, CBN reserves are growing, yet the naira remains under pressure. This is in stark contrast to other petrodollar currencies which have rallied since the beginning of the year as oil prices soared,” a second analyst said.