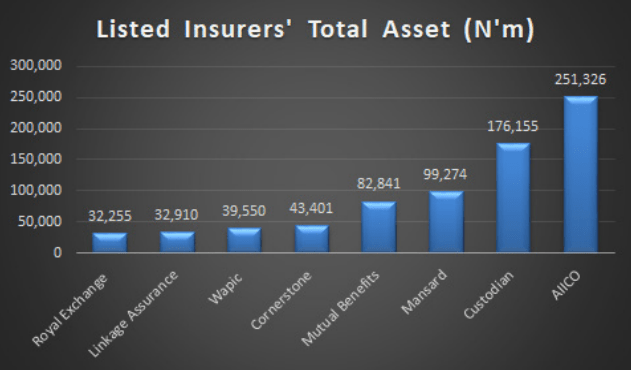 Listed insurers who operate in unfavorable underwriting environments have the capacity to underwrite new policies as their assets can cover liabilities for all claims and losses.

The average gross premium to policy surplus ratio of the seventeen largest companies on the bourse hit 94 percent in December 2020, but the figure is lower than the 101.13 percent recorded in 2019, according to MoneyCentral calculations.

Gross premiums income to policyholder surplus is a measurement of how much losses an insurer can absorb from claims.

If an insurer has more assets than liability, then it can undertake big ticket transactions that will give it the leeway to invest the premium to achieve a return while maintaining liquidity.

Regulators pay attention to the premiums written to policyholders’ surplus ratio because it is an indicator of potential solvency issues, especially if the ratio is high.

According to the National Association of Insurance Commissioners (NAIC), the usual range for the ratio can be up to three hundred percent.

Notably, solvency levels for insurers have been topical issue among investors and market participates who bemoan the abysmally poor contribution of the industry to the economy, and perhaps more is that industry operators are missing in big oil and gas deals because foreign investors have a perception that a lot of companies have very weak capital compared to their peers in emerging markets.

It is noteworthy that the National Insurance Commission (NAICOM), the body that regulates insurance activities in the country, is nimble enough to address the issue of solvency and place the industry in a global competitive environment as it has hiked the minimum capital requirement for all insurers at different business segments.

Composite insurance firms, that is, firms underwriting both life and general business would raise their capital from the current N5 billion level to N18 billion.

Some insurers are liquid enough to meet their obligations even amid a difficult environment, and there are no threats to going concerns, which means they have maintained consistent premium income growth.

Universal Insurance Plc solvency remains strong at 165 percent as at December 2020, which is higher than the 100 percent benchmark set by the regulator, according to data from its financial statement.

Similarly, Lasaco Assurance Plc solvency ratio stood at 148 percent as at December 2020, and its premium to surplus ratio has stood at 111.10 percent.

Custodian Investment Plc shareholders’ fund was up 28.54 percent to N57.50 billion in the period under review as against N44.73 billion the previous year.

Linkage Assurance Plc shareholders’ fund increased by 8.87 percent to N25.08 billion in the period under review as against N23.04 billion the previous year.

NEM Insurance Plc shareholders’ fund was up 23.45 percent to N17.38 billion in the period under review from N14.08 billion the previous year.

Cornerstone Insurance Plc total equity increased by 16.19 percent to N17.28 billion in the period as against N14.87 billion the previous year.

Some insurers could be acquisition targets for firms with strong capital bases and solid working capital position as they are technically insolvent, since their total assets cannot cover liabilities.

Goldlink, International Energy, and African Alliance have a combined N76.40 billion negative retained earnings on the capital side of their balance sheet, as they have been recording more losses than profit throughout their existence.

What this means is that shareholders will not be paid a dividend since the law prohibits beleaguered companies from making such distribution.

Analysts say the new capital rules and recapitalization scheme by the regulator will definitely spur mergers and acquisition, and they added that the present exercise is a reminiscence of the banking sector consolidation of 2005 that reshaped the banking system financial architecture.