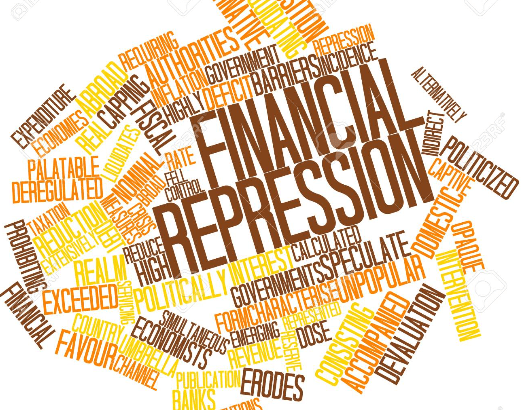 Nigerian Savers and investors are getting the short end of the stick, while the Federal Government feeds fat off their sweat, through a Central Bank of Nigeria (CBN) engineered Financial Repression.

Financial repression is a term that describes measures by which governments channel funds from the private sector to themselves as a form of debt reduction.

The overall policy actions result in the government being able to borrow at extremely low interest rates, obtaining low-cost funding for government expenditures.

Data from the FMDQ shows that one-year Treasury Bills yield 3 percent while benchmark 10 year bonds yield about 8.5 percent, well below the inflation rate of 12.2 percent.

Savers and Investors including, Pension Funds for retirees are therefore making negative returns on their investments, even as equity markets provide no respite.

According to the International Monetary Fund (IMF), policies that promote financial repression may include directed lending to the government by captive domestic audiences (such as pension funds or domestic banks), explicit or implicit caps on interest rates, regulation of cross-border capital movements, and (generally) a tighter connection between government and banks, either explicitly through public ownership of some of the banks or through heavy “moral suasion.”

In Nigeria today, financial repression issues are couched under the broad umbrella of “macro prudential regulation,” by the CBN.

CBN Goes into Full Repression Mode
As can be seen from the IMFs definition, the CBN under Godwin Emefiele has gone full Financial Repression mode with numerous policies including its elevated Cash Reserve Ratio (CRR) requirements, that now has an estimated N10.3 trillion in CRR, locked up in the banks vaults earning zero.

The CBN has also engineered captive lending to the Federal Government through its open market operations (OMO) policy ban for Pension Funds, which is forcing them to buy below inflation yielding FGN bonds.

MoneyCentral reported this week that Nigeria’s 10-year bond yields have fallen below comparable South African bonds for the first time ever.

Various CBN policy requirements have helped to cap interest rates, limited cross-border capital movements (the latest being a ban on FX for imports of maize), and tightened its grip on banks through heavy “moral suasion.”

The motives for the CBNs assault on Nigerian savers and investors is hardly a secret as the Federal Governments debt and interest payments on the debt rise to unsustainable levels.

The Nigerian Federal Government (FG) spent a total of N609 billion to service its domestic debt obligations in the first quarter (Q1) of 2020, a 139 percent surge from the fourth quarter (Q4) of 2019, latest data from the National Bureau of Statistics (NBS) show.

The Federal Governments total domestic debt stock amounted to N14.5 trillion as at March 2020, according to the Debt Management Office (DMO).

Repression and Inflation
A high inflation environment is often necessary and goes hand in hand with Financial repression. It may be one reason the CBN has failed to keep inflation below double digits over the past 5 years.

The IMF in a 2011 paper by Carmen M. Reinhart, Jacob F. Kirkegaard, and M. Belen Sbrancia notes that :
“Financial repression is most successful in liquidating debts when accompanied by a steady dose of inflation, and, like inflation alone, it only works with debts denominated in domestic currency. Low nominal interest rates help reduce debt servicing costs, while a high incidence of negative real interest rates liquidates or erodes the real value of government debt.”

Massive financing of the Federal Government through overdrafts, ways and means and purchases of government debt by the CBN have kept nominal and real interest rates lower than it would be if the FG went to the open market.

The Coming Fallout
The public debt burden in Nigeria is approaching unsustainable levels with debt service to revenue as high as 99 percent in the First Quarter (Q1) of 2020.

At the same time the Federal Government and the CBN are doubling down on financial repression policies aimed at holding down real returns for owners of capital in order to continue the party on like its 1999, without adopting necessary reforms.

The effects of the CBN financial repression cause economic harm throughout the productive sectors of the economy including for workers, savers, entrepreneurs, retirees, the insurance industry and pensions funds.

Pension Funds alone held some N7 trillion in Federal Government of Nigeria (FGN) securities as at April 2020, on behalf of some 9 million Retirement Savings Accounts (RSA) contributors, according to the most recent Pencom data.

One perverse side-effect of the Financial repression induced low yields would be to essentially force naturally risk averse fixed-income investors to try to make up for the huge loss of income by increasing their bets on risky investments often outside the financial system.

It would lead to a vicious cycle of funds leaving the formal system as investors shun enrolments to Pensions or insurance policies, leading to lower available savings to channel to investments and ever more CBN Financial repression policies.

The policies could also lead to a financial crises and Nigerians losing faith in the Naira.

It is interesting to note that the Federal Government has yet to achieve above 3 percent annual growth rate since 2015, despite its unorthodox policies.