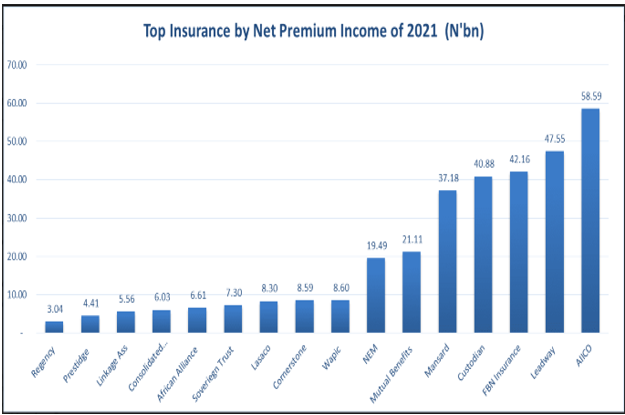 The top 10 Nigerian insurers, based on net premiums written, remained unchanged in 2021 when compared with the previous years, as they rebounded strongly from the pandemic shock.

Our directory of the Top 21 insurance companies is based on research data from MoneyCentral, with carriers ranked by net premiums written (NPW) in 2021.

While AIICO Insurance is on the top spot, with growth of 9.93 percent resulting in 2021 NPW of N58.60 billion, its lead did shrink following growth of almost 21.71 at Leadway Assurance to NPW of N47.55 billion for the year.

The improvement in revenue was driven by the wave of economic recovery  following the injection of large-scale stimulus by the government and the successful rollout of vaccines combined with the relaxation of lockdown policies that underpinned business activities as customers were able to take a cover.

The 21 largest insurers collectively grew net premium income by 13.60 percent to N334.63 billion in December 2021 from N294.58 billion as at December 2020, according to data gathered by MoneyCentral.

Analysts say the uptick at the top line (revenue) is driven by increase in demand for insurance products (stemming from increased risk awareness due to the pandemic) and upward policy repricing.

The Nigerian insurance sector expanded 6.2 percent year on year (y/y) in 2021, faster than the overall economic growth of 3.4 percent y/y according to the National Bureau of Statistics (NBS).

However, the sector’s contribution to the economy is abysmally poor and it lags peers in Africa.