Around 30% of Western Weapons Make it to Ukrainian Troops – CBS 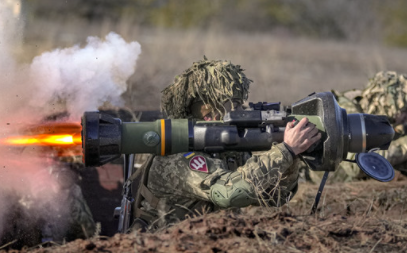 With the US and its allies pledging unprecedented levels of military support to Ukraine, a recent CBS News report suggested that only around 30% of the weapons sent by the West actually make it to the front lines.

The report adds to ongoing rumors of waste, corruption, and black market profiteering.

The US has approved more than $54 billion of economic and military aid to Ukraine since February, while the UK has committed nearly $3 billion in military aid alone, and the EU has spent another $2.5 billion on arms for Kiev.

An entire spectrum of equipment, from rifles and grenades to anti-tank missiles and multiple launch rocket systems have left the West’s armories for Ukraine, with most entering the country through Poland.

However, this rarely goes smoothly, CBS News revealed this week.

“All of this stuff goes across the border, and then something happens, kind of like 30% of it reaches its final destination,” Jonas Ohman, the founder of a Lithuania-based organization supplying the Ukrainian military, told the American network. Ohman said that getting the weapons to the troops involves navigating a complex network of “power lords, oligarchs [and] political players.” 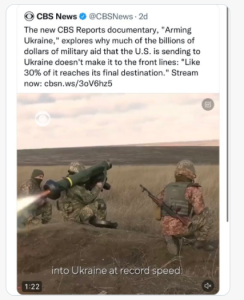 The new CBS Reports documentary, "Arming Ukraine," explores why much of the billions of dollars of military aid that the U.S. is sending to Ukraine doesn't make it to the front lines: "Like 30% of it reaches its final destination." Stream now: https://t.co/Ob7Y3EsWkn pic.twitter.com/YgVbpYZkHn

“There is really no information as to where they’re going at all,” Donatella Rovera, a senior crisis adviser with Amnesty International, told CBS. “What is really worrying is that some countries that are sending weapons do not seem to think that it is their responsibility to put in place a very robust oversight mechanism.”

Ukraine insists that it tracks each and every weapon that crosses its borders, with Yuri Sak, an adviser to Defense Minister Alexey Reznikov, telling the Financial Times last month that reports to the contrary “could be part of Russia’s information war to discourage international partners from providing Ukraine with weaponry.”

However, some officials in the West have sounded alarm bells. A US intelligence source told CNN in April that Washington has “almost zero” idea what happens to these arms, describing the shipments as dropping “into a big black hole” once they enter Ukraine. Canadian sources said last month that they have “no idea” where their weapons deliveries actually end up.

Europol has claimed that some of these weapons have ended up in the hands of organized crime groups in the EU, while the Russian government has warned that they are showing up in the Middle East.

An investigation by RT in June found online marketplaces where sophisticated Western hardware – such as Javelin and NLAW anti-tank systems or Phoenix Ghost and Switchblade explosive drones – was apparently being sold for pennies on the dollar.

Ukraine is consistently ranked as one of the most corrupt countries in the world, scoring 122/180 on Transparency International’s 2021 ‘Corruption Perceptions Index’, where 180 represents the most corrupt and 0 the least.

See link to watch video below:

This is the documentary saying 30% of western weapons reach their destination in Ukraine and the rest fall into a corrupt black hole. CBS has now removed it, but the web keeps everything.