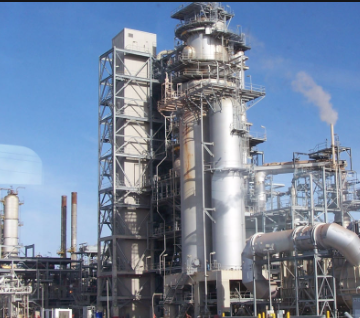 The Dangote Petroleum Refinery Project (DPRP), a 650,000 b/pd integrated refinery project under construction in the Lekki Free Zone near Lagos, Nigeria, will be powered by a 570 megawatt independent Power Plant (IPP).

A key component to the DPRP’s success is its independent power infrastructure, which allows the refinery to be completely independent of any national grid and its additional redundancies have been built in to provide stability in case of unexpected outages.

The power infrastructure includes the construction of eight gas turbines and four steam turbines combined for a total of 570 MW of power generation.

The DPRP comprises a number of processes and technologies that are well proven in other operating refineries around the world.

Its relatively high Nelson complexity index of 9.5 as a result of its capability to refine crude into mostly high value products, provides it with a strong competitive edge against older refineries in the region.

The DPRP will utilize complex technology (RFCC and hydrocracker units) comparable to the top quartile of global refineries, belonging to the category of largest and most complex global refineries.

The DPRP is expected to be Africa’s largest oil refinery and the world’s largest single-train facility based on production capacity.

In addition to the oil refinery and petrochemical plant, the DPRP includes the following supporting facilities:

The DPRP is designed to meet 100% of the Nigerian requirement of all refined products and will also have a surplus of each of its products for export to neighboring West African countries.

It is designed to process Nigerian crude oil with the ability to also process other crudes into high value product providing a competitive edge against older refineries in the region.

The DPRP is located on the Dangote Industries Free Zone, a designated industrial zone located on the Lekki Peninsula in the Ibeju-Lekki Local Government Area in south-eastern Lagos State.

The Dangote Industries Free Zone is approximately 2,635 hectares in land size and situated adjacent to Lekki Free Zone and Lagos Free Zone, with the Atlantic Ocean to the south and the Lekki Lagoon to the north.