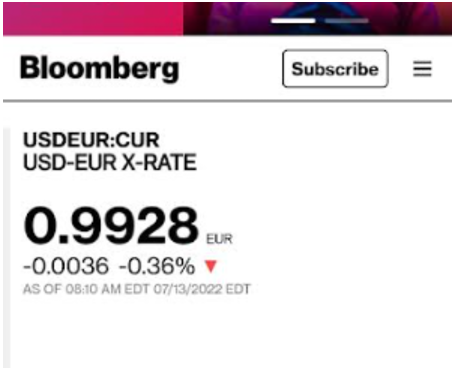 The financial market and by extension global economics is changing very fast than anyone could have ever imagined.

Some say the pandemic is over but the impact would remain indelible for a long time. Whilst it is a known fact that the path to recovery cannot be smooth for any country, given the devastating dent on social and economic structures, perhaps it could have been less chubby than today’s realities if the Russia-Ukraine war does not feature in the equation.

Like Neville Chamberlain said, “in War, whichever side may call itself the victor, there are no winners, but all are losers”.

Even so Ukraine is not officially a part of the European Union, it is being considered as a part of Europe given its geographical location and the “blue eyes” colour of its people, so the European countries individually and collectively went all out in defence of their own, calling the bluff of Russia, their single largest energy supplier and a significant producer of grains and a number of commodities for Europe.

The current Sanctions on Russia are like no other and expectations are for Russian leader, Putin Vladmir to either back out of Ukraine or face revolt from his people, as the economic sanctions hit hard on standards of living in the country of 146million people, spread over 11% of the World’s landmass.

Unfortunately, Russians may have proven more resilient than Europe and allies from the Americas ever thought, with consistent support for their leader and eagerness to soak the sanctions and impact on the economy.

Surprisingly, the Russian currency, which Europe thought would be rendered worthless has staged a strong recovery, as Russia’s push to receive proceeds of gas supplies in its Rubbles sailed through in a few European countries, which had no feasible alternative to taking the presupposed “enemy” gas, at least for their survival. Interestingly, Russia has not only become capitalistic in its dealings with European customers which hitherto enjoyed discounts on Russian oil and gas supplies but also become aggressive in all trade dealings.

In a dramatic shift of events, the European countries are under increasing pressure, with high energy and commodity prices undermining production and ratcheting inflationary pressures.

Incidentally, unlike the Federal Open Market Committee in the United States and other monetary policy authorities in the United Kingdom, Canada and Australia, which are responding rapidly to the historic inflationary pressures with tightening measures, the European Central Bank, which may have run out of tools is cautious of raising interest rate to avoid truncating the prolonged fragile recovery of the economy.

However, the world is not ready to wait for Europe, as demand-supply dynamics moves fast against the once power bloc, reflecting in the convergence of the United States Dollars and the Euro.

Exactly a year ago, the Euro/USD rate was USD1.189/Euro, but as reported by Bloomberg today, 13 July 2022, the Euro is now worth less than a United States Dollar at USD0.998/Euro, breaking a 20-Year jinx and undermining the viability of the Europe as a competitive region.

MoneyCentral spoke with Abiola Rasaq, a Lagos based financial analyst, who said, “this is perhaps indicative of the beginning of a new world order, but incidentally the effect would not be remote to Europe, it has serious implications for a number of African countries, especially the Francophone West and Central African economies, whose local currencies, XOF and XAF, are pegged to the Euro. It’s a major depreciation of value. More so, the external reserves of these countries which sit largely with the French Banks are losing serious value, particularly as their imports are largely outside of the Euro area. This may trigger new rounds of current and capital account deficits for these countries and may usher-in imported inflationary pressures.”

“It scary that Europe may slip further into recession once again faster than previously anticipated, even so it may leverage the weaker currency to rebuild its external trade sector but that would require diligent reforms and a lot of hard work and sacrifices from Europe, some of which may trigger political tensions and rearrangements, if not carefully managed. The currency is a powerful tool, thus the effect of this massive 19% weakness within a year will reverberate social and economic structures. It’s really going to be a hard nut to crack for the European Central Bank, as it would struggle to balance hard choices, either of which would have stretched consequences on the standard of living of Europeans, who already made serious compromises over the past decade,” Rasaq added.

Dr. Lizzie Kings-Wali, the Chief Executive Officer of Blackstone Capital Limited, expressed cautious optimism on the ability of Europe to manage through the currency crisis, as she notes “Europe has a strong foundation on which it can rebuild its productive base but the question is whether or not it would be ready to take tough decisions and go through a likely long haul that may be required to regain its strength and vigour as a critical regional bloc in the global world order. Hopefully, the leaders are able to manage through but it definitely would not be an easy sail.”

Interestingly, Rasaq noted it may be positive for Nigeria, subject to the ability of the government to leverage the situation, as he explained; “Over a quarter of Nigeria’s import is from Europe, the second largest trade continent after Asia. The weaker currency helps to taper potential imported inflation and confers stronger bargaining power, which if well channeled can funnel foreign direct investments, all things being equal. Hopefully, Nigeria can take advantage of this dynamics to strengthen its trade ties but clearly there is a need to begin to revisit the denomination of the external reserve, with probable diversification. Asia is undoubtedly getting stronger amidst the global tussles and with China capturing global manufacturing already, its new strategy may just well be anchored on currency management,” Abiola Rasaq explained.