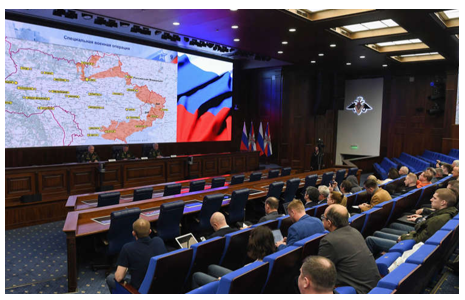 After a month of fighting that’s yielded limited territorial gains, the Russian military said it’s focusing efforts on taking full control of Ukraine’s Donbas region, potentially a sign it’s backing away from hopes of taking larger swathes of the country.

“Our forces will focus on the main thing – the complete liberation of Donbas,” Sergei Rudskoi, first deputy chief of the General Staff, said Friday, according to the Interfax news service.

Saying the operation is “successful,” Rudskoi claimed Russian troops have surrounded several major cities but deliberately didn’t seek to take them, instead aiming to pin Ukrainian troops down.

His comments were the most detailed official accounting of Russian military performance since the Feb. 24 invasion. Kyiv and its western allies have portrayed Moscow’s military drive as stalled by fierce Ukrainian resistance, as well as poor planning and logistics.

Russian troops haven’t captured any major cities and western officials estimate they may have lost as many as 15,000 killed. Rudskoi put losses at 1,351 killed and 3,835 wounded, the first official accounting since March 2.

He said Russian forces control 93% of the Luhansk People’s Republic and 54% of the Donetsk one.

President Vladimir Putin originally announced the military operation as one to take those breakaway regions, even as Russian forces attacked Ukraine from different directions and pushed toward Kyiv and other major cities.

Moscow officials said their goal was the full “demilitarization” and “de-Nazification” of Ukraine. Kyiv and its allies reject the Russian claims of neo-Nazi influence as nonsense.