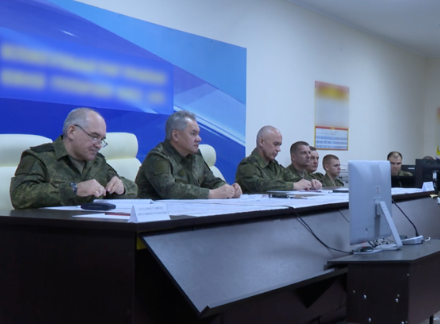 Russian Defense Minister Sergei Shoigu has ordered Russian military units operating in all areas of Ukraine to step up their operations in order to prevent strikes on eastern Ukraine and other territories controlled by Russia, the ministry said in a statement on its website on Saturday.

It said Shoigu “gave the necessary instructions to further increase the actions of groups in all operational areas in order to exclude the possibility of the Kyiv regime launching massive rocket and artillery strikes on civilian infrastructure and residents of settlements in Donbas and other regions.”

“The head of the Russian defense ministry gave the necessary instructions to ramp up the actions of groups in all operational areas in order to exclude the possibility of the Kiev regime to launch massive rocket and artillery strikes on civilian infrastructure and residents of settlements across Donbass and other regions,” the military said in a statement.

The minister also awarded Gold Star medals to Lapin and Major General Esedulla Abachev for “courage and heroism” throughout the ongoing conflict. The decree to present the officers with the top state awards had been signed earlier by Russian President Vladimir Putin, the military noted.

Russia sent troops into Ukraine on February 24, citing Kiev’s failure to implement the Minsk agreements, designed to give the regions of Donetsk and Lugansk special status within the Ukrainian state.

The protocols, brokered by Germany and France, were first signed in 2014. Former Ukrainian president Petro Poroshenko has since admitted that Kiev’s main goal was to use the ceasefire to buy time and “create powerful armed forces.”

In February 2022, the Kremlin recognized the Donbass republics as independent states and demanded that Ukraine officially declare itself a neutral country that will never join any Western military bloc. Kiev insists the Russian offensive was completely unprovoked.