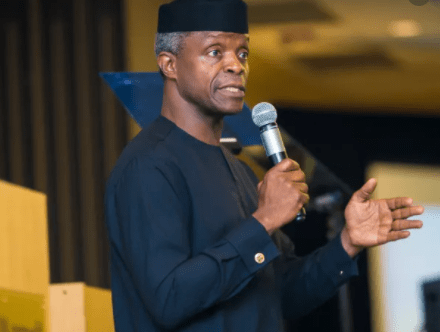 Editorhttps://moneycentral.com.ng
Groups under the auspices of Progressive Consolidation Groups PCGs, have visited the Nasarawa state governor to canvas support for Vice president Yemi Osinbajo to run for the 2023 presidency. The groups were cut across the six geo-political zones of the country.
Leader of the groups, Dr. Aliyu Rabiu, said the aim of their visit to Nasarawa state was to canvas for the vice president professor Yemi Osinbajo to run for the presidency come 2023.
He said the move for canvassing for the vice president was born out of his track records and train of events in the polity, noting that it was the reason why they have agreed to work towards promotion of his candidature.
Dr. Rabiu applauded the APC leadership style under president Muhammadu Buhari, saying that his social policy has added value to the unemployed youth across the country. According to him, the contributions of the vice president in the area of law, means when given the opportunity to aspire for president, the rule of law would get a boost under his leadership.
He said: “We are glad today in Nigeria to have president Muhammadu Buhari for his developmental strides within the shortest period of time in the areas of agriculture, social economy policy, fighting insecurity in the north east and other parts of the nation, the ongoing road construction across the nation despite the COVID-19 pandemic and other challenges that bedeviled the country.”
Responding, the Nasarawa state governor, Abdullahi Sule, said the vice president, professor Yemi Osinbajo is the most qualified candidate that can succeed President Muhammadu Buhari come the 2023 presidential election.
His words: “Osinbajo is the only saleable product that can succeed president Muhammadu Buhari in the forthcoming 2023 presidential elections across the country.
He affirmed that the vice president is a man of integrity that everybody loves to reckon with, noting that as a professional lawyer he would lead the nation to the highest level of development.
Share
Facebook
Twitter
Pinterest
WhatsApp
Previous articleGeocycle, the Lafarge Company Turning Industrial Waste to Profit
Next articleDangote Cement Generates More Profit than Middle East, North Africa Peers
- Advertisement -