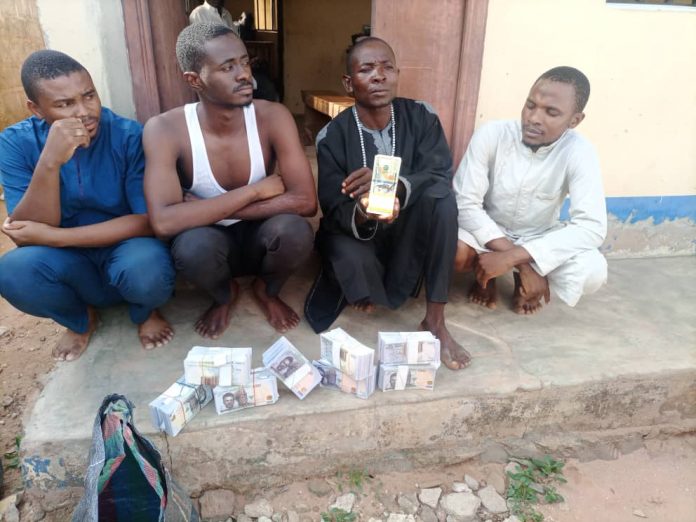 The Police Command in Nasarawa State says it has arrested a seven-member syndicate in Lafia with N7.8million and 110,000 dollars counterfeit currencies.

Mr Bola Longe, Commissioner of Police in the state, paraded the suspects on Friday at the Police Command Headquarters in Lafia, alongside 61 others for various criminal offences.

Longe said that two of the  suspects were arrested on June 4, when they attempted to pay some money into an account using Point of Sale (PoS) located around the College of Agriculture in Lafia.

According to the Police Commissioner, a student of the Nasarawa State University, Keffi, and one other, went to deposit N50,000 at the POS when the agent discovered some of the notes to be fake.

He said that the suspect insisted that she must accept the money which resulted in an altercation and she had to seek police intervention.

“Upon receipt of the Information, police personnel attached to Area Command, Lafia moved immediately to the scene and got the suspect arrested,” he said.

Longe said further investigation led to the arrest of five more suspects and N7.8 million counterfeit currency in 1,000 denomination, and 110,000 dollars counterfeit notes in 100 dollars bills were recovered as exhibits.

He said that the counterfeit currencies recovered had been taken to the Central Bank of Nigeria (CBN) as investigation continued on the matter.

Also, the commissioner said the command arrested a 39-year-old man who posed as Vice Chancellor and acting Registrar of the Federal University of Lafia, on social media to defraud unsuspecting admission seekers and contractors.

Longe said the suspects was arrested in Bukan-Sidi Lafia, during a sting operation on June 24.

He said that preliminary investigation revealed that the suspects who claimed to be a lecturer at the Benue State University, Makurdi, on sabbatical leave, was found to be a secondary school dropout with no means of livelihood.

The Commissioner of Police said that other criminal  suspects arrested within the last two months included 38 for cultism, eight for armed robbery, five for kidnapping and two for railwaytrack vandalism.

He said all the suspects would be prosecuted as soon as investigations were concluded.

Longe appealed to the members of the public for continuous collaboration with the police through useful information  in order to rid the state of criminal elements.