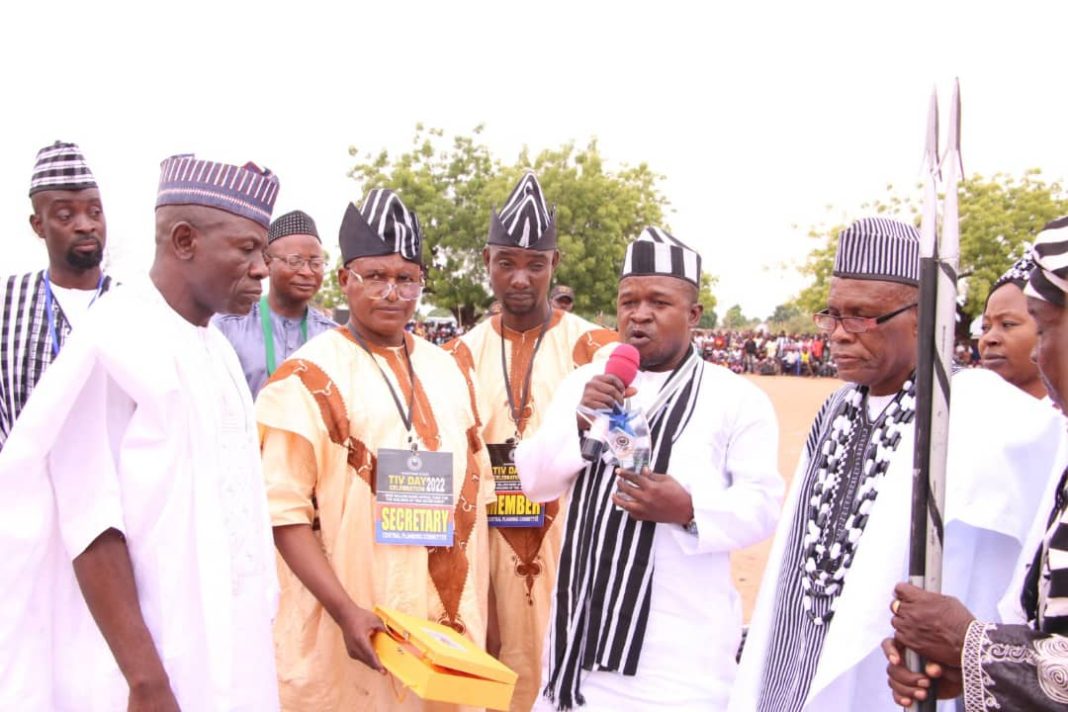 A social cultural group, Tiv Development Association TIDA, Nasarawa State has confered chieftancy title on Governor Abdullahi Sule as the ” Zege Mule U Tiv” The great shelter of Tiv in the State, Senator George Akume, as the “Akinde U Tiv ,Governor Simon Lalong of Plateau State, bestowed with the title of “Akpabam – U- Tiv.

Others who were line up in traditional titles include; the Speaker, Nasarawa State House of Assembly, Rt. Hon Ibrahim Abdullahi, “Asor-Tar-U-Tiv”, Former Member, House of Representatives, Dr Joseph Kigbu as Zege Tsar-U Tiv and the Nigeria Ambassador to Sierra Leone, Henry Omaku, as “Gbenda- U- Tiv, Nasarawa State”, among others.

MoneyCentral reports that the traditional titles were bestowed on recipients by Ter Tiv 11, Chief Clement Ibo, at the “2022 Tiv Day and 500 million naira appeal fund for the building of TIDA Secretariat” held on Saturday at Imon, Obi Local Government Area of the State.

At the event, TIDA President, Comrade Peter Ahemba posted that the awards were given in recognition of the enormous contributions of the awardees, geared towards promoting peace, unity and harmony among the Tiv people in the state.

Ahemba, who is also the Nasarawa state correspondent of the Pilot Newspaper, lauded the proactive security measures of the State government under the leadership of Governor Sule, added that the prompt action by the state Governor, has brought about relative peace being enjoyed by the people, hence the conferment of the traditional title of Zege-Mule U Tiv on Gov.A A Sule.

“Nasarawa State Tiv Day is an annual event, a period when Tiv sons and daughters all over the State and beyond travel to Imon town, for reunion and discussions on unity, peace and development of the Tiv nation.”

“It is a cultural day that showcases our traditional fabrics such as Anger, Chado and Tugudu, among others. This event could not hold after the one held in 2013 due to security challenges that affected the Southern Senatorial District, particularly the Tiv people, who are predominately in the southern zone.

“We are however grateful to God, who has brought a messiah in the person of our amiable Governor, Engr. Abdullahi A. Sule, who has been able to restore peace, not only in the Southern Zone but the state as a whole. The Governor has no doubt demonstrated that he is truly the great shelter of the Tiv people,” he said.

The Media proffesioner, noted that the association has been complementing the peace efforts of the state government to ensure the sustenance of the existing peace.

The TIDA President appreciated other recipients as well as eminent personalities, statesmen/women, stakeholders and all illustrious sons and daughters of Tiv both home and in diaspora their contributions towards the peace and unity of the Tiv nation and called for its sustenance.

Accordingly he requested that some Tiv farmers especially those in Kwara, Keana and Doka in Doma LGAs as Assakio, Lafia East Development Area village were displaced due to crisis, calling on the government to expedite action for their quick return to enable them continue with their economic activities.

Receiving the award, Governor Sule, thanked the association for finding him worthy of the award, saying it will spur him to do more for the citizens of the state.

Sule, who was represented by the State Commissioner for Information, Culture and Tourism, Yakubu Lawal urged the Tiv nation to continue to live in peace and tolerate one another in order to enjoy more dividends of democracy.

Gov. Sule, reassured of his administration’s commitment to promoting peace.