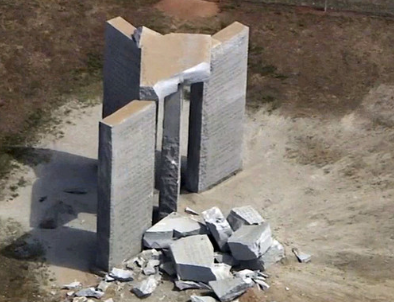 A mystery-shrouded monument in the US state of Georgia often called the ‘American Stonehenge’ was severely damaged in an explosion early on Wednesday. It was later demolished entirely, for safety reasons.

State and local authorities are investigating the incident as a bombing. The granite Georgia Guidestones were built in 1980 and featured messages for humanity in eight languages with a dedication to the “Age of Reason.”

“The preliminary information indicates that unknown individuals detonated an explosive device at around 4:00 a.m. on Wednesday, July 6th,” the Georgia Bureau of Investigation said in a statement, adding that authorities in Elbert County asked for its assistance with the investigation. The site is currently cordoned off until bomb disposal technicians can examine it.

One of the wings of the monument has been “completely destroyed” and the capstone damaged, according to Christopher Kubas, executive vice president of the Elberton Granite Association.

Helicopter footage taken by the Greenville, South Carolina-based WYFF-TV shows one of the four vertical pillars in pieces on the ground, with two major chunks missing from the horizontal slab on top of the monument.

“I am sad for the US and for the world,” said Kubas, pointing out that the monument was a major tourist attraction, with up to 20,000 people coming to visit every year.

While the messages inscribed on the monument were considered controversial by some, Kubas said they may have been meant for some future generations, “after maybe a cataclysmic event,” to avoid making the same mistakes as their ancestors.

Video released by the GBI on Wednesday evening show a silver sedan approaching the monument, and the moment of the explosion. No suspects have been identified yet.

(2/3) The videos show the explosion and a car leaving the scene shortly after the explosion.  No one was injured. pic.twitter.com/8YNmEML9fW

For safety reasons, the structure has been completely demolished,” the GBI said on Wednesday evening.

Envisioned as the US version of the famous Stonehenge megalith in England, the Georgia Guidestones were carved out of local granite in 1979 and unveiled in 1980. The mystery man who commissioned the monument, who used the pseudonym Robert C. Christian, said he represented “a small group of loyal Americans,” and paid top dollar for the makers to follow his very specific plans.

“Let these be guidestones to an Age of Reason,” said a smaller plaque erected off to the side. On the pillars themselves, ten messages were carved in eight languages – English, Spanish, Swahili, Hindi, Hebrew, Arabic, Chinese, and Russian. It was not clear which languages were on the pillar that was destroyed.

The messages themselves have attracted controversy over the years. The pillars posited that the human population should not exceed 500 million for “perpetual balance with nature” and urged reproduction to be guided “wisely — improving fitness and diversity.” One new living language should unite all humanity, while all things should be ruled “with tempered reason” and personal rights should be balanced with “social duties,” among other exhortations.

Critics have accused the monument of promoting “satanism” and anti-Christian values. One of the Republican candidates in the Georgia gubernatorial primaries in May advocated for its demolition as part of her platform. She ended up with less than 4% of the vote.

The Guidestones have been defaced with graffiti and paint twice before, in 2008 and 2014. After the 2014 incident, the Granite Association put up surveillance cameras around the site.