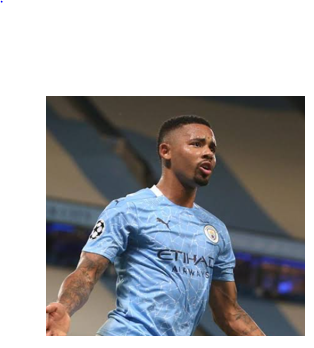 Editorhttps://moneycentral.com.ng
A recent report from Brazil has revealed that Manchester City are now ‘on course’ to accept a €50 million in order to offload Gabriel Jesus to fellow Premier League side, Arsenal in the summer of 2022.

As Manchester City confirmed the signing of Erling Haaland from Borussia Dortmund on Tuesday afternoon, it now seems likelier than ever that Gabriel Jesus could be heading to Arsenal or elsewhere in Europe during the coming summer.

Since his move to the Bundesliga in 2020, the Norwegian international has etched his reputation as one of the select few elite strikers in world football – which is certainly bad news for the aforementioned Brazilian, who has recently been flourishing as a number nine for Manchester City.

Add to that the fact that the multi-functional rising Argentine star Julian Alvarez – who profiles similarly to Gabriel Jesus – is set to join Manchester City during the coming pre-season, and it seems like a heavily speculated switch away from the Etihad Stadium may well be the best course of action for the 25-year old.

While several reports have highlighted the fact that a transfer to Arsenal could be on the cards during the coming summer, new details have emerged that point to the fact a move looks closer than ever.

As per a report by Marcelo Hazan and Bruno Andrade of Brazilian outlet UOL, while Manchester City ‘want’ a €60 million transfer fee in order to offload Gabriel Jesus to Arsenal, negotiations are ‘on course’ to sanction his sale for a €50 million fee.

Further details suggest that from a financial perspective, the deal is similar to Erling Haaland’s transfer to Manchester City. However, the former Palmeiras man has been ‘planning’ his departure long before the Dortmund goal scorer was confirmed to be headed to the Etihad Stadium.

It has been claimed that Gabriel Jesus holds the belief that the Gunners could provide him with a significant boost of opportunities to play as a striker – which gives him the golden opportunity to impress Brazil coach Tite and hopefully confirm his place on the flight to the Qatar World Cup in November this year.

Additionally, it is stated that Mikel Arteta’s experience of working closely with the versatile forward during his time as assistant coach at Manchester City also benefits Arsenal in potentially striking a deal.

From a Manchester City perspective, it looks likely that they are satisfied with profiting from Gabriel Jesus’ departure, considering his current contract is set to expire as soon as the summer of 2023.