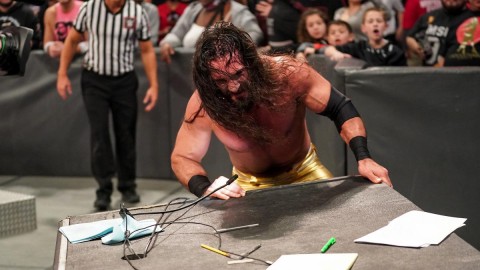 WWE superstar Seth Rollins destroyed the ringside area on Raw after losing his ‘last chance’ at a match for this year’s WrestleMania.

The Visionary is currently left without anything to do for the biggest show of the year, and he’s desperately trying to find his path onto either night in Dallas, Texas on April 2 and 3.

On Monday night, he appeared throughout the show as he tried to make his voice heard and land himself a coveted spot on the double-header one week after losing to Kevin Owens in a match to see who will interview ‘Stone Cold’ Steve Austin at the event.

His microphone kept cutting out as he tried to make his case during the opening match (more on that below), but backstage Adam Pearce gave him a glimmer of hope.

He later interrupted AJ Styles’ big Raw return after being attacked by Edge, with the Phenomenal One wanting revenge at WrestleMania.

However, Rollins – who has been met with chants for Cody Rhodes throughout the night – suggested her should face the Rated R Superstar instead, as he’s becoming increasingly desperate.

Pearce and Sonya Deville booked Seth and AJ for the main event, with the winner getting to face Edge.

Not surprisingly, these two shone as they were given more than 20 minutes to put on a fantastic, entertaining and high stakes match.

Edge came out and attacked Styles with a steel chair to give him the DQ win – which kept them on track for WrestleMania, while Rollins torn up the ringside area and vowed that next week’s Raw won’t happen unless he gets what he wants.

Raw started with the infamous glass shatter as ‘Stone Cold’ Steve Austin’s music blared out, only for Kevin Owens to appear dressed as the Hall of Famer – complete with a bald cap and oversized knee braces.

Owens is set to confront Stone Cold during a special edition of the KO Show, which promises to get physical, and he took the chance to mock his legendary rival.

There was a moment it seemed like Austin would actually come out as his music hit again, but it was more trolling from Owens, who called for beer in the ring and ended up hitting a Stunner on a member of the crew.

In the first match of the night, The Miz was on commentary as Rey and Dominik Mysterio beat NXT Champion Dolph Ziggler and his tag team partner Robert Roode in an entertaining bout.

After the bell, the A-Lister attacked the Master of the 619 and unmasked the legend, holding up his prize while Dominik covered up his dad, shouting for a towel to hide his face.

Miz later revealed he stole the mask for his WrestleMania partner Logan Paul, and urged the YouTuber to wear it next week on Raw.

Omos made quick work of both Apollo Crews and Commander Azeez – which is a shame, WWE should be doing a lot more with Crews given his undeniable talent, while the reaction to the giant’s recent stand-off with Azeez shows there was more potential here.

Shayna Baszler and Natalya picked up a win over Rhea Ripley and Liv Morgan, while Carmella and Queen Zelina laid out four of their Mania challengers after the match, and made up following a backstage disagreement

Becky Lynch was at her best as she came out to address her recent attack on Bianca Belair, and hyped up their Raw Women’s Championship match at WrestleMania.

Then, Pat McAfee joined the Raw commentary team as his Mania opponent Austin Theory took on the United States Champion Finn Balor in non-title action, with the former NFL star causing enough of a distraction to give the champ the win.

RK-Bro teammates Randy Orton and Riddle took on Alpha Academy’s Chad Gable and Otis in a typically brilliant tag team match, while Otis went on the attack after the bell.

The Street Profits came down to break things up, but Angelo Dawkins and Montez Ford ended up taking out everyone to stand tall.

Meanwhile, the 24/7 Title picture continued in much the same vein, as Reggie and Dana Brooke beat Tamina and Akira Tozawa in a short and, at this point, harmless tornado tag match.

Rey and Dominik Mysterio defeated The Dirty Dawgs (B)