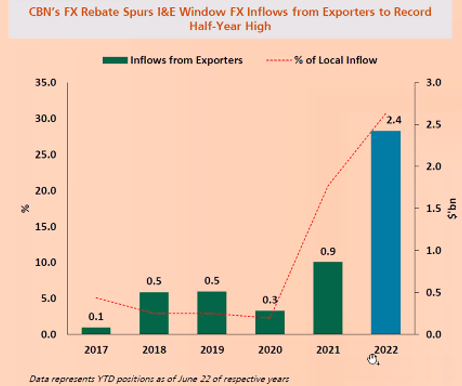 Non-oil exporters have ramped up the repatriation of export proceeds through the investors and exporters (I&E) window of the foreign exchange market in response to the RT 200 programme introduced by the Central Bank of Nigeria (CBN).

Foreign exchange inflows from non-oil exports coming through the I&E window surged by 166 percent to $2.4 billion in the first six months (H1) of 2022, compared to the earlier 2021 period, according to the latest CBN data.

The RT200 FX Programme is an initiative of the CBN which aims to raise $200 billion in Foreign Exchange (FX) earnings from Non-Oil proceeds over the next 3 – 5 years.

A major anchor of the program is the Non-Oil Export Proceeds Repatriation Rebate Scheme. The rebate scheme is designed to incentivize exporters in the Non-Oil export sector to encourage repatriation and sale of export proceeds into the FX Market.

It was born out of the need to develop new strategies aimed at earning more stable and sustainable inflows of FX, in order to insulate the Nigerian economy from shocks and FX shortages.

Payment of the incentive is made on a quarterly basis. The accounts of exporters that qualify for rebates are credited one week after the end of the quarter.

In April the CBN Governor Godwin Emefiele ordered the immediate release of N3.5 billion in rebates to 150 exporters who took part in the RT200 FX Programme.

Some analysts however say the target of $200 billion by the CBN is too optimistic.