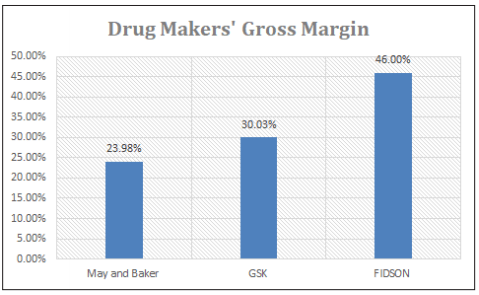 Drug makers in Africa’s largest economy are generating and retaining money in their business as the coronavirus pandemic forced consumers to spend more on health and essential commodities.

That resulted in a sharp jump in profit margins, which indicates financial stability needed for shareholders to be rewarded for being risk takers.

The growth recorded in the industry stemmed majorly from the impact of the pandemic which forced a change in the lifestyle of people, thereby pushing consumers to spend more on drugs to keep them safe and healthy.

The average gross margin of the dominant players in the industry- Fidson HealthCare Plc, May and Baker Plc, and GlaxoSmithKline Nigeria- increased to 39.13 percent in March 2021 from 33.33 percent in 2020, according to data gathered by MoneyCentral.

This is a key indicator of the strength of its manufacturing and product pricing. A high gross profit margin indicates that a company is successfully producing profit over and above its costs.

The drug makers are earning more per Naira of sales while returning higher returns to shareholders.

Each of the companies have magnified both sales and profit, which validates management and board of directors’ focus market penetration strategies that has enabled their firms surmount the macroeconomic headwinds.

Nigeria’s drug-manufacturing companies have struggled to source raw materials and imported inputs because of a foreign-currency squeeze caused by the plunge in income from oil that was exacerbated by the advert of the coronavirus pandemic.

The majority of Nigerians cannot afford drugs as inflationary pressures have eroded their purchasing power as the cost of healthcare continues to spiral up.

Healthcare cost, which is an inconspicuous driver of core inflation, rose by 15.8 percent year on year (y/y) and 1.1 percent month on month ( m/m), according to the latest inflation figures released by the National Bureau of Statistics (NBS).

In the five years preceding May 2020, the Health care sub-index of the core inflation grew at an average rate of 10.0 percent. Following the Foreign Exchange (FX) concerns in 2020, healthcare cost has been on the rise.

The rise in the cost of pharmaceutical products, medical services, dental services, paramedical services, and hospital services have jointly accounted for the 15.8 percent (y/y) rise in health care cost in the last 12 months ending May 2021, according to analysts at CSL Stockbrokers Limited.

“In our view, cost, and accessibility of healthcare services in Nigeria must be an area of focus for the government and we believe both public and private sector participation will be required,” said the analysts.

The International Monetary Fund and the World Bank have urged the central bank to adopt a unified foreign exchange system that will spur economic growth and pave the way for businesses to thrive.

GlaxoSmithKline has a price to earning ratio of 13.10 times with a dividend yield of 6.67 percent; The drug maker’s share price closed at 2:00 pm, Friday, valuing it at N7.27 billion.