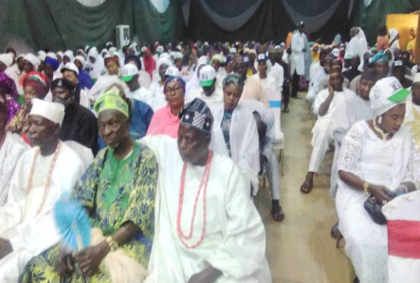 As electioneering campaigns for the 2023 election gathered momentum, a group under the aegis of the Northern Yoruba Agenda for Tinubu (NOYAT), has promised the Presidential candidate of the ruling All Progressives Congress (APC), Bola Ahmed Tinubu of its total support.

The group who pledged it unalloyed support for the actualisation of Tinubu’s presidential ambition, also disclosed that no fewer than 20 million eligible voters within the northern region shall be mobilised.

“We have the network across the 19 northern states, including the Federal Capital Territory, and a mechanism has already been put in place across the northern region to sensitize the citizens on the reason why Bola Ahmed Tinubu should be the next president of the country come 2023,” the group explained.

Speaking during a peace summit and special prayer organised for Bola Tinubu and the Kaduna state APC gubernatorial candidate, Sen. Uba Sani at the weekend in Kaduna, the National Coordinator of the group, Hon. AbdulRasheed Adekeye explained that the group’s support for Tinubu and Shettima was based on their track records.

According to the national coordinator, the NOYAT’s position to support the APC presidential candidate was based on principles and ideological conviction and not on tribal sentiments.

“We pitched our tent with Asiwaju Bola Ahmed Tinubu in the spirit of fairness, equity and justice, as it was already being demonstrated by the Northern APC Governors.

“We believe in the capacity of Tinubu and Shettima, and this is because of the legacies that the duo left behind in Lagos and Borno states respectively as governors.

“We are never in doubt of Tinubu and Shettima’s capacity to lead the country to an enviable position that will meet the yearnings of Nigerians,” Adekeyele emphasized.

He therefore called on Nigerians to support the presidential ambition of Tinubu, adding that Nigerians must not allow themselves to be used by selfish politicians who do not mean well for the country.

Also, at the event, a special prayer was observed on behalf of Tinubu, Shettima and Uba Sani with notable northern based Yoruba clergies and traditional title holders in attendance seeking God’s favour for victory. A video CD dedicated to Tinubu was also launched.