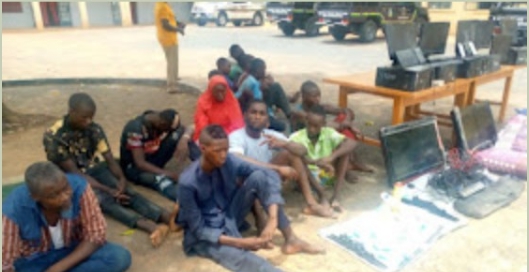 No fewer than 14 suspects have been apprehended by the operatives of the Adamawa state command for house-to-house robbery in Yola North and Yola South Local Government Areas. The operatives of the command also recovered 1 Audi vehicle, six (6) computer sets, 2 TV sets, hard drugs among others.

A statement by the image maker of the command,The Adamawa State Police Spokesperson DSP Suleiman Yahaya Nguroje, made available said that the suspects had confessed to robbery and rustling 34 cattle.

“The suspects during interrogation confessed committing offences of House to House robberies within Yola North and South LGAs and rustling 34 cows among others,” Nguroje added.

The Commissioner of Police, S.K Akande, has assured the good people of the state of sustained efforts towards fighting crime, improving public safety and security across the state in the year 2022.”

According to him, the command’s operatives attached to State CID and Crack squad, during the week disconnected a network of organized crime and apprehended 14 suspects.

He equally directed all the DPOs to intensity intelligence led- policing, sustain collaboration with the public as well as dominate the public space so as to prevent hoodlums from re-grouping anywhere within the state. CP Akande commended the operatives of the command for collaborating with members of the public in preventing the criminals from escaping arrest and assured that persons apprehended will be prosecuted.