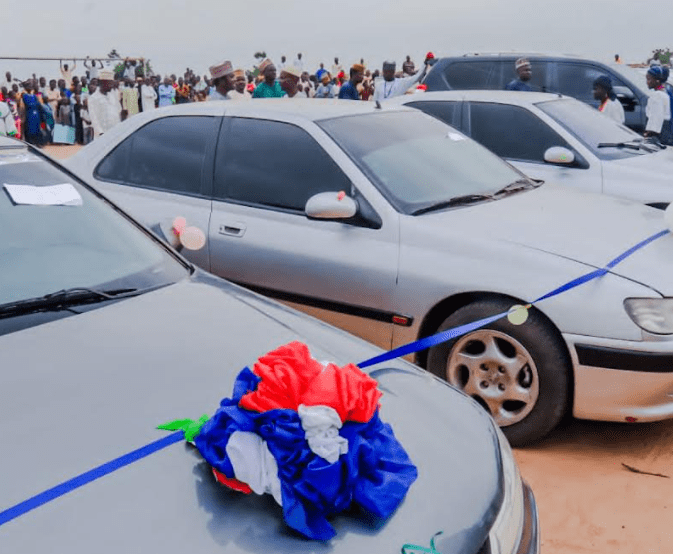 As State Lawmaker,  Hon. Saddam Bello Distributes Cars, Motorcycles, Other Items to Constituents
Governor Muhammadu Inuwa Yahaya has assured the people of Gombe State that the APC-led administration under his watch will continue to consolidate on the giant strides so far recorded in the last two years in the areas of infrastructure and human capital development for the benefit of the citizenry.
Governor Inuwa Yahaya gave the assurance while speaking at the distribution of empowerment items facilitated by the member representing Funakaye North in the Gombe State House of Assembly, Hon. Saddam Bello Saleh at Bajoga.
The Governor noted that citizens tend to appreciate the true essence of leadership when leaders cultivate the habit of  doing those things that can improve the lives of the people, saying “this is where we stand’.
He said his administration will continue to accord priority to policies and programmes that have direct bearing on the life of the common man, urging elected officials and political appointees to also strive in impacting on the lives of the electorate in whatever way they can.
The Governor noted that the empowerment programme initiated by Hon. Saddam Bello falls in line with the All Progressives Congress, APC manifesto of meeting the social and economic yearnings and aspirations of the people.
He said the time has come for the APC in the State to flaunt its life changing interventions for everyone to see and therefore called on the people of Funakaye North not to hesitate in returning the favour by staying true to the leadership qualities of Hon. Saddam Bello.
” What Hon. Saddam Bello has done today is indeed remarkable and he has demonstrated an act of generosity and true representation. With the donation of  50 motorcycles, 50 grinding machines, 50 sewing machines and 5 cars worth millions of Naira, the member has indeed demonstrated uncommon benevolence and he  deserves commendation from us all and reciprocity from the people he represents “.
The Governor added that  members of the All Progressives Congress in the State are hapoy with the spirit of giving displayed by the Honourable member to bring succour to the people of his Constituency.
The Speaker,  Gombe State House of Assembly,  Hon. Abubakar Mohammed Luggerewo said the empowerment scheme could not have come at a better time when Governor Muhammadu Inuwa Yahaya is taking pragmatic steps towards putting the State on the pedestal of sustainable development.
He said under the leadership of Governor Inuwa Yahaya,  the State has witnessed social, economic and infrastructural development with direct links to the yearnings and aspirations of the common man.
He congratulated Hon. Saddam Bello for initiating the scheme which he said will go a long way to changing the social and economic status of the people.
Initiator of the empowerment programme,  Hon.Saddam Bello Saleh thanked the APC for giving him the platform upon which he is now contributing his qouta to the growth and development of his community and humanity in general.
He explained that he initiated the programme with the aim of alleviating poverty and improving the well-being of his constituents in support of Governor Muhammadu Inuwa Yahaya’s effort in that direction.
Hon. Saddam Bello, who is the Deputy Majority Leader in the Gombe State House of Assembly said the empowerment programme would not have been possible without the support of  Governor Inuwa Yahaya’s intervention which led to the acquisition of 50 each of motorcycles, sewing and grinding machines as well as 5 motor vehicles.
He commended the Governor for creating a conducive atmosphere for the conduct of a free and fair election in the just concluded ward and Local Government congresses.
He said the people of Funakaye Local Government Area are in full support of his administration’s policies and programmes and will continue to remain steadfast  in that regard.
He also applauded Governor Muhammadu Inuwa Yahaya for institutionalising a framework that led to the increase in Internally Generated Revenue IGR of the State, saying such development places Gombe on path of sustainable growth, especially with the clamour among some states  on retention of Value Added Tax,  VAT.
Also speaking, the Majority leader in the Bauchi State House of Assembly, Hon.  Tijjani Aliyu said such empowerment Schemes cannot be possible without a purpose driven leadership.
He therefore commend the Governor for setting the example upon which the initiator of the empowerment scheme drew inference.
The Emir of Funakaye,  Mu’azu Abubakar Kwairanga  thanked Governor Muhammadu Inuwa Yahaya for executing projects that have direct bearing on the lives of the people of his domain as well as for his administration’s efforts towards maintaining the prevailing peace in the State.
The royal father equally used the occasion to appeal to the Governor to trigger machinery that will lead to the full accreditation of the State Polytechnic Bajoga.
Others who spoke in support of Governor Muhammadu Inuwa Yahaya nay the empowerment programme included the state’s Attorney General and Commissioner of Justice, Zubair Muhammad Umar, Chairman of Funakaye Local Government Council, Ibrahim Adamu Cheldu and the Local Government APC Chairman, Zitu Tongo.