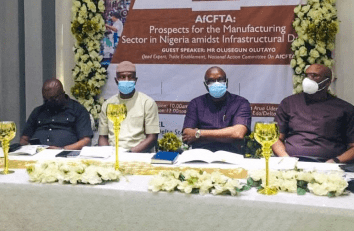 The Edo State Governor, Mr. Godwin Obaseki has said the government is supporting the manufacturing and industrial sector in the state to boost productivity and reap from the gains of the African Continental Free Trade Agreement (AfCFTA).
The governor disclosed this at the 35th Annual General Meeting (AGM) of the Manufacturers Association of Nigeria (MAN), held in Asaba, Delta State.
Obaseki, represented by the Permanent Secretary, Ministry of Wealth Creation, Employment and Cooperatives, Mr. Joel Edionwe, noted that the economic environment in the country has not been fair to the manufacturing sub-sector, adding that more needs to be done to provide the right incentives to drive productivity.
On the initiatives of the Edo State Government to support businesses, he noted that the Edo State Skills Development Agency was established by his administration to up-skill youths and create a surfeit of employable manpower in the state.
According to the governor, “We now have a number of skilled and semi-skilled persons that the industries can engage in the state. Other initiatives that will help manufacturers, processors and businessmen to survive and do business in our state have been put in place.
“The Edo State Government knows that access to funding is a challenge. That is why we are partnering with financial institutions, including the Central Bank of Nigeria (CBN) and the Bank of Industry (BOI) in order to make funds available. Edo State recently initiated another partnership with the BOI. We launched a N2 billion fund to cater for about 50,000 SMEs, and the government has promised that in the next one year, the funds will be scaled up to N10 billion in order to make finances available to more producers.”
Obaseki continued: “Edo State Government experimented with the establishment of the production centre where we provided a conducive environment for production, with the provision of electricity, water, security and other basic infrastructure.
“We did this to enable SMEs engage, produce and survive at least in the first one year, so that they can do business, create wealth and employ our people. The success of that production centre has led to the replication of same in the three senatorial districts of the state.”
The Managing Director, Edo State Investment Promotion Office (ESIPO), Mr. Kelvin Uwaibi, noted that the non-oil sector must be strategically positioned to drive economic growth.
He added that the manufacturing sector can revamp the economy with the opportunities provided by the African Continental Free Trade Areas (AFCFTA).
Chairman, MAN Edo/Delta Branch, Engr. (Dr) Okwara Udensi and other speakers commended the Edo State Government for the ongoing initiatives to improve the investment space especially in the area of taxation system, the Enterprise Park, the Benin River Port, the Edo Inland Dry Port among others.