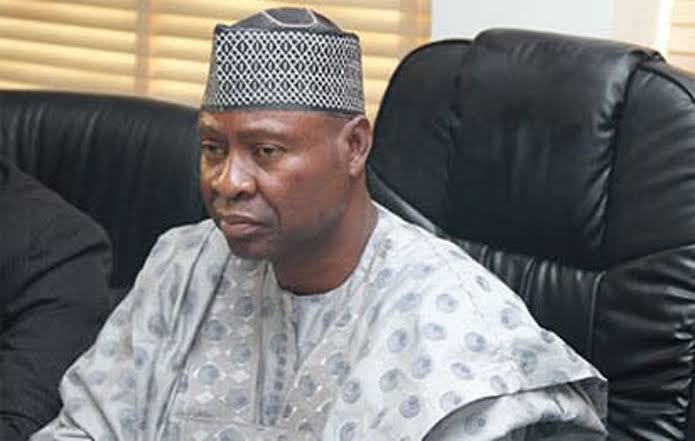 The Director General, Industrial Training fund (ITF) Joseph Ari, said he has not contracted anyone to print political posters on his behalf.

Ari was reacting to a faceless group who he alleged to have printed campaign posters with logo of the All Progressive Congress, indicating that he (Joseph Ari) is vying for Plateau senatorial district in the 2023 elections.

The Director General of Industrial Training fund (ITF) Joseph Ari made this known while briefing Journalists in Jos, on Saturday, at The Nigeria Union of Journalists NUJ press center.

“What has come to my attention is that in their desperate attempts, they have printed campaign posters suggesting that I am aspiring for an elective position, and also canvassing support for the aspirations of some candidate that are vying for elective positions in our great party, the All Progressive Congress (APC) in the upcoming APC National convention.”

“I have also been reliable informed that these disgruntled elements plot to flood the convention venue with these posters in order to breed mistrust and disharmony and thereby generating rancor for their own selfish purposes.”

“I have never contemplated and not contemplating on vying for any elective position in the nearest future, as I am presently busy and fully engaged with the onerous responsibility of developing the mandate of the ITF to equip Nigerians with skills for employability and entrepreneurship.”

“Since my appointment as the director general/ chief executive of the Industrial Training fund (ITF), I have invested all energies in ensuring that the institution achieves the vision and aspiration of it’s founding fathers.

“Therefore, under my watch,the Industrial Training fund has hit lofty heights, fulfilling its onerous mandate of developing the nations human resources, while also partnering with the Federal Government to actualize the objectives of the President Buhari Administration especially with regards to poverty reduction,job and wealth creation.”

“To this end,the public is therefore, advised to disregard any campaign poster to the effect that I, Sir Joseph N. Ari,is running for any elective position, or in support of the ambition of any candidate during the upcoming APC convention as it is false, unfounded and not deserving of any attention. I have, therefore reported the matter to the security agencies for their further necessary action.

“I have taken the pains to bring what has transpired to the public glare,as it will be difficult to convince anyone after the deed has been done.” He appealed.

Reiterating on his mandate as ITF director general “under his leadership the ITF has been at the forefront of instilling in Nigerians the need for the country, like other developed nations of the world, to embrace Technical and vocational Education and Training (TVET) as a real alternative to paper qualification and white -collar jobs, and the most sustainable solution to the seemingly intractable problem of unemployment and poverty.

In doing this,our efforts have received plaudits and commendations of governmental and non-governmental organizations.
Some of you may perhaps, be aware of the activities of unscrupulous element that are bent on pulling me down,” Ari noted