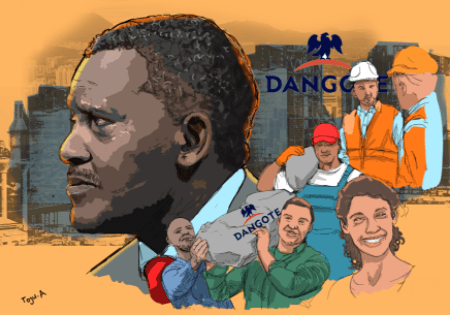 Central Bank Governor Godwin Emefiele has said that the project could employ more than 70,000 people when operational.

Consulting firm McKinsey has compiled a database of large companies with business in Africa revealing some 400 companies earning revenues of $1 billion or more, including Dangote Group with revenues of over $4 billion (N1.6 trillion) in 2020. Dangote Cement alone had sales of over N1 trillion last year.

McKinsey however notes that despite some notable corporate success stories, Africa lags behind other emerging regions in hosting large companies.

Excluding South Africa, it has just 60 percent of the number one would expect if it were on a par with peer regions.

In fact, nearly half of Africa’s big firms are based in South Africa.

Moreover, Africa’s big companies are smaller, on average, than those in other emerging economies. Because of these twin issues—too few large firms and too little scale among those that do exist—the total revenue pool of large companies in Africa (excluding South Africa) is about a third of what it could be, according to McKinsey.

Mckinsey in its report states that Africa’s relative lack of big companies matters not just for shareholders but also for society, because these firms are the primary drivers of economic growth.

“We might think of big companies as the baobabs of the business landscape: not only do they tower above the rest, they also have deeper roots and longer life spans,” McKinsey said.

Known as the tree of life, the baobab produces highly nutritious fruit that sustains many communities.

“Like baobabs, large firms create their own ecosystems, fostering small-business creation through their supply chains and distribution networks. They are also better able to attract capital, which means they are much more likely to compete on the global stage,” the report said.

Dangote Group is doing exactly this for the Nigerian economy and in the rest of Africa geographic locations where it operates.

The two major listed companies of the Dangote Group (Dangote Cement and Dangote Sugar) paid a total of N113.08 billion in taxes in 2020.

To validate the thesis that large firms are better able to attract capital, Dangote Cement (the largest listed company on the Nigerian Stock Exchange) saw its total borrowings rise by 37.4 percent to N483.1 billion as at December 2020.

Despite the Covid-19 pandemic and disruptions to economic activity, the company was able to issue its 5-years series 1 Naira bond with a value of N100 billion and a coupon rate of 12.5 percent during the year.

Commercial paper was also issued in 2020 by Dangote Cement under a programme with a maximum face value of N150 billion. The tenure is between 90 days and 270 days with discount ranging from 4.0 percent to 8.0 percent.

Across the globe in Emerging Markets large conglomerates like the Dangote Group are driving innovation, jobs and strengthening economies from India to South Korea, Mexico to China.

In South Korea, the tech sector that is helping pull the economy out of a pandemic slump is largely built on the work of Samsung Electronic’s Lee Kun-hee and his driving belief that the country could become a global powerhouse in semiconductor chips, panels and smartphones.

When Samsung’s revenue grew, so did South Korea’s gross domestic (GDP), and today Samsung’s turnover is the equivalent of 12 percent of Korea’s GDP or one eighth of the Korean economy.

Today computer chips now account for the largest portion of South Korea’s exports, offering a shield for the economy during the pandemic.

South Korea’s semiconductor exports is forecast to increase 5.1 percent to $102 billion this year while the overall exports show a decrease of $50 billion or so.

In other words, sluggish exports are likely to continue this year along with increasing semiconductor exports led by Samsung Electronics alone. At present, Samsung Electronics’ market cap is equivalent to about 37.4 percent of the main Korean stock index, KOSPI market cap.

This has helped to make South Korea Asia’s fourth largest economy, behind China, Japan and India.

Reliance Industries Ltd, which operates in India the world’s sixth-largest economy, is one of India’s largest private sector companies, with a consolidated turnover of $44.7 billion, cash profit of $6.1 billion, and net profit of $4.2 billion as at 2016.

It is the first private sector company from India to feature in Fortune’s Global 500 World’s Largest Corporations list, and its activities span hydrocarbon exploration and production, petroleum refining and marketing, petrochemicals, retail and telecommunications.

Led by its Chairman Mukesh Ambani, India’s richest man, Reliance Industries embarked on a seven-year, $100 billion investment spree across refining, petrochemicals, telecom and retail, in the process, creating hundreds of thousands of jobs and bringing innovation to sectors like telecoms.

Reliance Jio Infocomm Ltd’s disruptive entry in September 2016 led to $10 billion in annual savings for consumers and expanded India’s per capita GDP by about 5.65 percent, a report of Institute for Competitiveness (IFC), at Harvard Business School, said.

“Since Jio’s entry into the Indian telecom markets on September 2016, the face of the industry has not remained the same. It changed the basis of competition by offering free lifetime calling to its consumers in an industry that derived 75 percent of its revenue from voice,” the report said.

Within six months of Reliance Jio’s launch, India became the highest mobile data user in the world consuming over 1 billion GB data every month as compared to 200 million GB earlier.

“Data usage in the country has soared. India is now only second to China in terms of app downloads. Such levels of digital consumption were unprecedented a year-and-a-half ago,” it said.

It’s contribution to the exchequer was at 5.3 percent as a share of India’s gross tax revenue.

The same trend is visible in other major Emerging Markets (EM) like China and Mexico, where large firms like Jack Ma’s Alibaba Group, and Carlos Slims America Movil dominate.

Ma is one of China’s most-successful entrepreneur who built Alibaba and financial technology company Ant Group Co. into behemoths that have penetrated practically every corner of daily life, from shopping to food delivery to buying a home.

The Mexico City-based company had revenue of $52 billion in 2019. Slim also has stakes in the New York Times and commercial banks. Through his family’s investment vehicle Grupo Carso, he has interests in the Mexican construction industry.

Even in what is now world’s largest economy the United States, a man named John D Rockfeller set up a company Standard Oil in the late 1870’s that eventually went on to dominate the oil business in the United States. His personal wealth made up about 2 percent of the U.S. GDP.

What Rockfeller was to oil, JP Morgan was to banking and Andrew Carnegie to steel. In all these tycoons with their capital, helped to create the infrastructure that propelled America into becoming an industrialised nation.

It has built one of the world’s biggest cement plants in Obajana, Kogi state, just outside the Nigerian capital Abuja, and one of its largest sugar refineries in the ports complex in Lagos.

Its planned oil refinery in the Lekki, suburb of Lagos, among the world’s largest at 650,000 bpd, is due to begin operations this year.