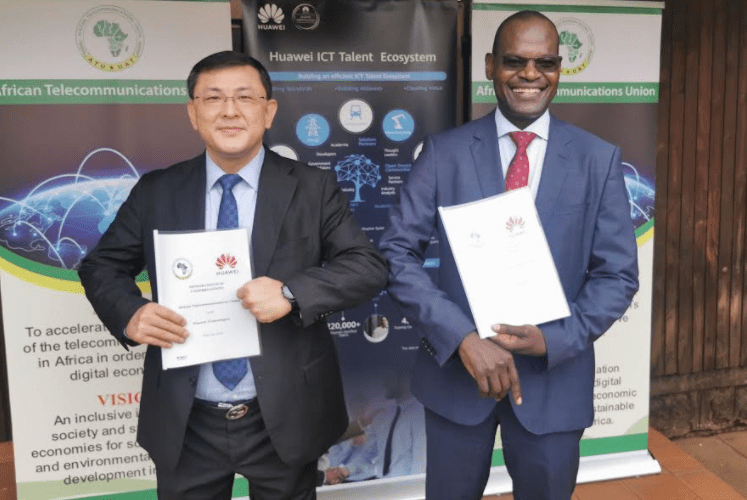 The African Telecommunications Union (ATU) has signed a Memorandum of Understanding (MoU) with tech giant Huawei that will see African countries and organizations build capacity for ICT transformation.

Under the agreement, Huawei will provide training on skills development, including reskilling and upskilling for ATU members.

The MoU will also see the two organizations collaborate to support local innovation, share information on latest trends, challenges and solutions in Africa and globally, and expand the digital economy as well as rural connectivity, in the continent, through furthering research.

A 2019 report by the United Nations Conference on Trade and Development (UNCTAD) on digital economies established that Africa and Latin America together account for less than 5 per cent of the world’s data centers.

If left unaddressed, the report concluded, divides will worsen existing income inequalities. This, coupled with the fact that in least developed countries (LDCs), only one in five people use the Internet as compared with four out of five in developed countries, is part of the motivation for the Huawei-ATU partnership.

Speaking during the signing ceremony held today in Nairobi-Kenya at the ATU headquarters, Mr. John OMO, Secretary-General of the ATU, praised Huawei for their contribution to Africa: “Huawei has transformed connectivity and made a major contribution to the continent through its investments in digital infrastructure, ICT skills, environmentally-friendly connectivity solutions, and cutting-edge technologies for rural areas. The organization is a trusted development partner of Africa. The document we are signing today aims at strengthening this partnership.” He added: “Africa has a tremendous opportunity to fully grasp the potential from new technologies”.

The two organizations have a long history of working together and this new agreement will support African countries, regulators, and citizens benefit from the transition to a digital economy, adopt new technologies, promote secure and resilient networks, and gain the digital skills necessary to drive their economies forward.

Samuel Chen, Vice President at Huawei Southern Africa region thanked the ATU for leadership and promotion of ICTs in Africa: “The ATU is playing a critical role in the region supporting member countries with their policies and strategies, sharing best practices, building capacity and driving innovation and we are delighted to be able to support them”. He noted: “We have connected hundreds of millions of Africans to secure, high-speed broadband and cloud solutions in the last two decades and earned the trust and support of our customers and regulators; we look forward to doing even more”.

According to the MoU, the partners will also start offering cutting-edge trainings to ATU members, access to global experts to discuss the latest technologies and trends, and collaboration on research to help progress the continent’s digitization.

The African Telecommunications Union (ATU) was founded in 1977 as a specialized agency of the Organization of African Unity, now African Union, in the field of telecommunications with Member States as its membership. ATU took its present name in 1999 via a transformation which in part saw the incorporation of the private sector into its membership as associate members.

ATU provides a forum for stakeholders involved in ICT to formulate effective policies and strategies aimed at improving access to information infrastructure and services.

In addition, the Union represents the interests of its members at global decision-making conferences and promotes initiatives aimed at integrating regional markets, attracting investment into ICT infrastructure, and building institutional and human capacity.

The mission of the Union is to accelerate the development of the telecommunications/ICTs in Africa in order to achieve digital economies. The Union envisions an Africa that is empowered as an inclusive information society with strong digital economies for sustainable social, economic and environmental development in Africa.

ATU currently has 48 Member States drawn from Governments and 54 Associate Members from within and outside the African region.