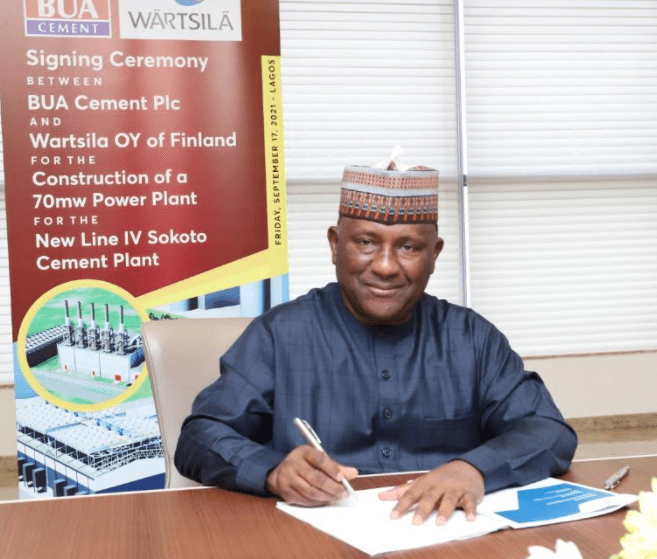 As Nigeria clocks 61 today, it will be a great disservice to the nation and the investment community if we do not mention the contribution of conglomerate BUA Group to the economy.

It is not empty verbosity, or prolixity to say that philanthropist and billionaire owner of BUA Group, Abdul Samad Rabiu is a rare gem and industrialist in the mold of the men who built America such as Cornelius Vanderbilt, John D. Rockefeller, Andrew Carnegie, J. P. Morgan, and Henry Ford.

Like the legendary Americans, Abdul Samad Rabiu’s industrial innovations and business empire are revolutionising Nigerian society. His companies are helping to reduce the country’s import bills by investing in domestic production capacity, creating jobs and wealth in the process.

Of course, the conglomerate produces cement, refines and processes sugar, edible oils, rice, and flour products, as well as distributes agriculture. A 200,000 barrels per day oil refinery is also being built.

The cement business is a success story, and it is in the frontline of the federal government’s backward integration policy that saw the country become a net importer of the building material from a heavy importer over a decade ago.

BUA Cement, which was birthed as a result of the Group company merging two subsidiaries, the Cement Company of Nigeria and Obu Cement Company, has overtaken peer rival Lafarge Africa, second largest cement producer in Nigeria.

It signed a contract for the building of additional three production lines of 3MMT/annum each to be located in Adamawa, Edo, and Sokoto states.

The conglomerate had entered into an agreement with China Sinoma  to build a steel plant in Nigeria and two cement plants in East Africa for $1.9 billion.

Analysts at Chapel Hill Denham Limited said upon completion, BUA Cement’s installed capacity will be 20 million metric tonnes (MT), and they added that the company is fast catching up with rival firm, Dangote Cement.

“While we have not explicitly factored this into our valuation, we imagine that these will place the group in a strong position to benefit from the structural demand opportunities in Nigeria,” said the analysts.

The cement firm also recorded volume growth of 9.6 percent to 2.7 million metric tons (mmt), and it is looking set to launch its Kalambaina line III, to capture more market share.

Of course, the cement sub sector is the backbone of the manufacturing industry, a proxy for economic growth.

For instance, after three consecutive quarters of negative growth caused by the coronavirus pandemic and structural bottlenecks, the manufacturing sector GDP turned positive in the first quarter of 2021, thanks to the contributions of Dangote Cement, Lafarge Africa, and BUA Cement.

BUA Group is immensely in support of the federal government Sugar Master Plan, which aims to create jobs and support economic diversification.

In Kwara State, in Nigeria’s middle belt, the conglomerate is developing a sugar plantation and a new refinery that will have the capacity to process 14,000 tonnes of cane per day when it comes into production later this year. This will allow it to produce 200,000 tonnes of refined sugar, 20,00,000 litres of ethanol and 35 MW of electricity annually.

“The plant is made up of about 20,000 hectares and we have invested over $250 million. “It is quite good; we will be creating over 10,000 jobs and we will be saving the country hundreds of millions of dollars just by producing sugar in our plantations. That should have happened a long time ago, said AbdulSamad Rabiu.

Nigeria’s National Sugar Master Plan (NSMP) was designed to attract over $1 billion annually in local and foreign direct investments and create an estimated 107,000 jobs over the first ten-year period.

According to The Central Bank of Nigeria (CBN), Nigeria spends between $600m to $1 billion to import sugar into the country annually.

The country currently spends about N1.89 trillion annually on the importation of food, the Federal Government.

The monolithic reliance on import is undermining the external reserves, which is why there is always severe dollar scarcity whenever crude oil price slumps.

Of course, the vagaries of crude oil price have always been the root cause of poor macroeconomic conditions since the early eighties when the first shock hit the country.

Nigeria Foreign Exchange Reserves stood at N34.8 billion in Mar 2021, and that compares with $44.50 billion in 2018, according to the National Bureau of Statistics (NBS).

The sub-Saharan Africa (SSA) region is expected to be the direct beneficiaries of the 200,000 barrels-per-day BUA Refinery r as the project is expected to drastically reduce the countries’ fuel import that is straining the external reserve.

The company had selected France’s Axens for a multibillion, a firm that makes to convert oil and biomass to cleaner fuel.

Since the four largest local refineries are in comatose, and upgrading them    quixotic, the country has been relying on importation of refined oil to meet the demand of a fast-growing population.

And the importation of the product comes at a monumental cost to the government and economic wastage to the nation.

The federal government spends as much as N140 billion to N150 billion to subsidise premium motor spirit, petrol, monthly, according to a recent report by the Nigerian National Petroleum Corporation.

“This large complex will help in reducing Nigeria’s dependence on imported fuels and petrochemicals,” said BUA, which also has interests in cement, food and mining.

AbdulSamad Rabiu the Philanthropist made crucial difference during the Coronavirus Crisis

Abdul Samad Rabiu donated to hospitals to facilitate the treatment of the coronavirus pandemic, a show of magnanimity emblematic of a philanthropist.

In February, the Conglomerate had paid for 1 million doses of the AstraZeneca COVID-19 vaccine to Nigeria.

The Group donated a grant of N5 billion to the Akwa Ibom State Government for healthcare and social development.

The grant of N5bn is part of the foundation’s annual $100m Annual Africa Fund for Social Development and Renewal.

Speaking at the presentation, a representative of Chairman, ASR Africa and BUA Group, Kabiru Rabiu, commended Udom for his strides in upgrading the state healthcare infrastructure and referral system at the primary and secondary levels as well as the state’s handling of the COVID-19 pandemic.