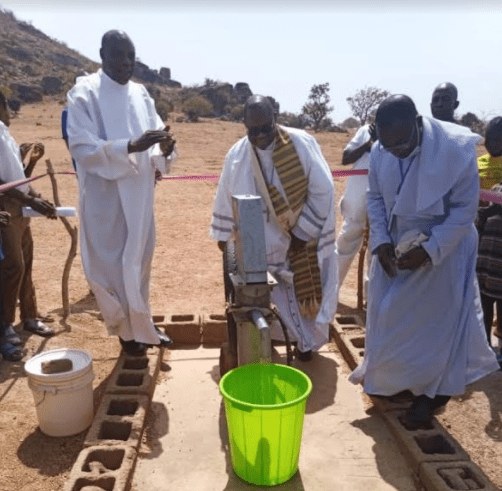 Editorhttps://moneycentral.com.ng
The Catholic Diocese of Jalingo on Monday donated a borehole to Tuyebubong community in Zing local government area of Taraba state.
Speaking at the commissioning and official handing over of the borehole to the community, the Catholic Bishop of Jalingo Diocese His Lordship Bishop Charles Hammawa noted that the project was part of the outreach program of the diocese aimed at addressing the peculiar needs of the people as a way of preaching the Gospel practically.
Hammawa said that the community had been without a reliable source of portable water for over the centuries and so the diocese decided to take it up upon itself to reach out to them through the Justice, Human Development and Peace Initiative of the Church.
“It is so sad that over 26 million Nigerian children do not have access to portable water and are experiencing high or extremely high water vulnerability according to the UNICEF.  This is totally unacceptable and we must work hard to change the narrative. As a Church, we have a mandate to preach the Gospel to the ends of the Earth and there is no better way of doing it than meeting the practical needs of the people.
“With this project however, we hope that most of their water challenges would have been taken care of. I urge the community to take up the protection of this facility and it’s maintenance seriously,” Hammawa said.
Coordinator of JDPC in Jalingo Diocese Rev Fr Stephen Bakare noted that this was the third borehole that the commission has drilled and donated to communities in Zing local government area among several others donated to communities across the state to ameliorate the plight of the people especially the school children who have to face extreme hardship for lack of portable water.
He called on the people and government to support the commission in carrying out it’s work and charged the people to take it as “water for peace and not water for crisis”.
The community leader Francis Shongong who spoke on behalf of the people thanked the Church for remembering them and coming to their aid.
Shongong noted that, for the over 100 years of it’s existence, the people of the community have had to contend with extreme water scarcity and mostly have to drink from the same  pond with their livestock especially during the dry season when most of the ponds dry off and the people can not tap from rain water.
Our correspondent who visited the community noted that, the people had to travel over several kilometers in the push to access the only surviving pond that is not only very unhygienic, but could barely produce a few gallons of water at a time.
The project commissioning coincides with this year’s world’s water day celebration.
Share
Facebook
Twitter
Pinterest
WhatsApp
Previous articleDPR Adamawa Shuts Down 16 Petrol stations for Violating Pump Price
Next articleHeritage Bank Joins in World Water Day with Installation of Borehole
- Advertisement -