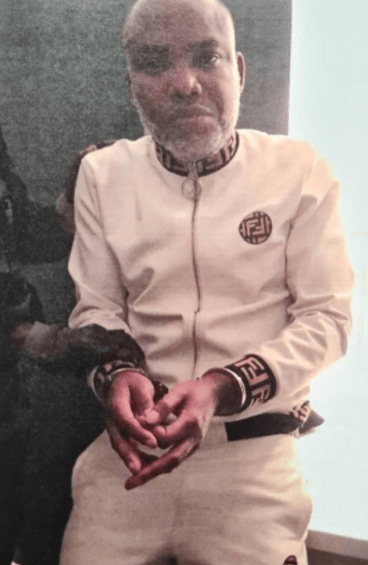 Sequel to the alleged abduction of the leader of Indigenous People of Biafra, Nnamdi Kanu in Kenya and his alleged rendition to Nigeria and continued detention by the Department of State Service, DSS, the United Kingdom (UK) has asked Nigeria to explain where and how the  separatist leader who holds British citizenship was arrested.

This came as the kinsmen of the re-arrested leader of  IPOB  have claimed that President Muhamnadu Buhari’s lopsided appointments in favour of his Fulani and Northern kinsmen is fuelling the renewed agitation for self determination in parts of the country.

Kanu’s lawyer, Ifeanyi  Ejiofor had alleged that his client was detained and maltreated in Kenya before being sent back to Nigeria, Reuters has reported.

Kanu, the leader of the Indigenous People of Biafra, IPOB, who has been agitating for secession of Biafra was on the run outside Nigeria for four  years following attack on his country home at Afra-Ukwu, in Abia State  by security forces until he was brought to court in Abuja on June 29 and told he would face trial.

“We are seeking clarification from the Nigerian government about the circumstances of the arrest and detention of Nnamdi Kanu,” said Tariq Ahmad, a junior minister at Britain’s Foreign Office.”

The Nigerian authorities have refused to say where Kanu was arrested, while Kenya’s ambassador to Nigeria has denied his country was involved.

But responding to a question about Kanu’s case from a lawmaker, Ahmad said Britain had requested consular access to Kanu and stood ready to provide consular assistance.

A spokesman for Nigeria’s Department of State Service, the security agency that is holding Kanu, could not immediately be reached for comment yesterday, a public holiday in Nigeria.

Kanu’s lawyer, Ifeanyi Ejiofor, alleged he was abducted by Kenya’s special police force and held for eight days before being handed over to Nigerian authorities.

Your nepotism fuelling agitation for self determination

President General of Isiama Afaraukwu Development Union, Umuahia North Council of Abia State, Chief Obioma Ebeogu; and his Vice, Chief  Benjamin Ohaeri, made the claims in an interview with our Correspondent.

Chief Obioma who spoke on the heels of Kanu’s alleged “abduction from Kenya and extraordinary rendition to Nigeria”, insisted that their son commited no crime but was only complaining of the marginalisation of his people.

He argued that if President Buhari had given a sense of belonging to other tribes particularly Ndigbo in his political appointments, many people would not bother to seek independence from Nigeria.

Obioma argued that the glaring disparity in distribution of political offices and other appointments by the Buhari-led administation is the reason the agitation for self autonomy by different sections of the country is on the increase.

The PG urged President Buhari to rather consider the issues raised by Kanu and other self  autonomy proponents instead of clamping them into detention.

Kanu’s kinsmen who raised concern over his health condition appealed to the federal government to grant him access to his personal physicians.

They said that “agitation for self determination is never a crime,” and told the federal government “to stop treating Kanu as a common criminal.”

Likening Kanu to Martin Luther King Jr who vigorously fought for the emancipation of the Blacks in America, the IPOB’s leader’s kinsmen urged Buhari to stop seeing him as a terrorist but a heroic freedom fighter seeking the good of his people.

“Our son is like Martin Luther fighting for the liberation of his people. The federal government should release him and engage him with a view to addressing the the issues he is raising”.

They further demanded that Kanu’s family should be granted unfettered access to him.

The kinsmen also urged the President to prevail on the Department of State Services, DSS, to allow Kanu sign the request for consular services and diplomatic assistance by the United Kingdom. They said preventing the IPOB leader from signing such request as alleged by his lawyer constituted to a huge infringement on his fundamental rights.